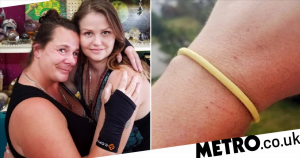 If you always have a hair tie hanging out on your wrist (shout out to Love Island winner Amber Gill, who’s a prime example), you really need to read Lisa McLennan’s story.

Lisa, 47, has worn a spare hair bobble around her wrist for as long as she can remember, keeping it handy in case she needed to tie up her hair.

She reckons she’s had a hair tie on her wrist every day for 30 years – and that’s left her with permanent nerve damage.

Earlier this year Lisa was diagnosed with carpal tunnel syndrome, a nerve condition caused by the compression of a nerve in the wrist.

The mum-of-four, from British Columbia in Canada, now has the painful condition in both her wrists, but the pain is far more severe in her left, which is where she wore a hair tie almost all hours of the day for the last 30 years.

She’d originally suspected the pain in her wrist was a result of arthritis until a shopkeeper pointed at her hair tie and told her to stop wearing it.

‘I injured the tendon in my thumb and they checked me for carpal tunnel syndrome,’ explains Lisa.

‘I was in shop a few days later telling the woman who worked there how my left wrist was more severe than my right and she pointed to my elastic and said ‘stop doing that then’.

‘I was like ‘pardon me’ and she explained that a neurologist had told her not to do it because it can cause issues.’

Lisa says the habit has caused circulation issues, inflammation and damage to the main nerve in the hand that is so severe that when she isn’t in pain, her wrist goes numb.

Lisa is now sharing her story to warn people of the dangers of this common habit.

‘It was always on my wrist whenever it wasn’t in my hair,’ said Lisa.

‘I’m so aware now that I shouldn’t be doing it but I’ll be cleaning the house, find an elastic and put it on my wrist, then I think oh no what am I doing.

‘I have taken to using a hair claw instead, so I don’t put the elastic on my wrist.

‘Don’t do it, just don’t, whether it causes issues right now or not, it’s an easy fix, an easy, proactive way to save yourself pain later.’