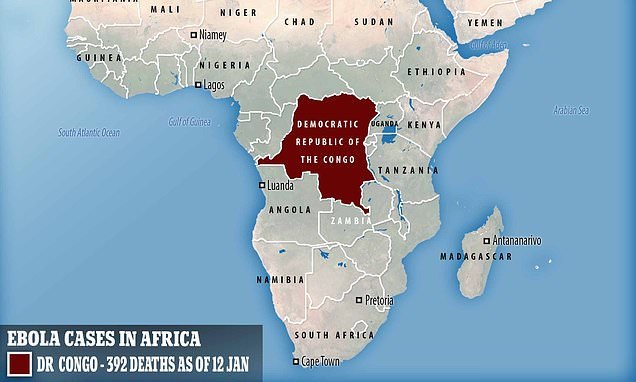 The killer Ebola outbreak in the Democratic of Congo will only get worse if political instability continues to break the public’s trust, experts fear.

Professor Jeremy Farrar, an infectious disease expert and director of the Wellcome Trust, said there is ‘nothing to stop’ the epidemic spiralling into ‘worst case scenario’ as a result of ongoing political conflict.

Felix Tshisekedi was declared the winner after the DRC’s presidential elections on December 30, which took place two years behind schedule.

But accusations that the results of the first uncontested democratic transfer of power after 18 years don’t ‘add up’ are threatening more violence.

As a result the ‘public health will suffer’, as confidence in authorities is essential for containing the virus – considered one of the most lethal in existence.

Ebola has already killed a total of 392 people, 343 confirmed, as of January 12, according to the World Health Organisation (WHO). 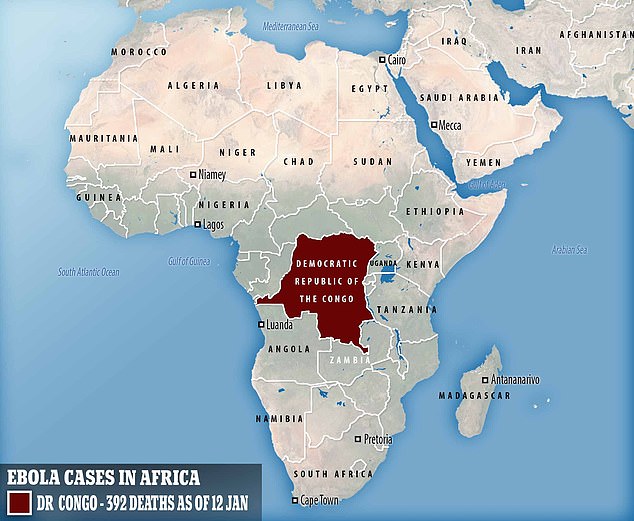 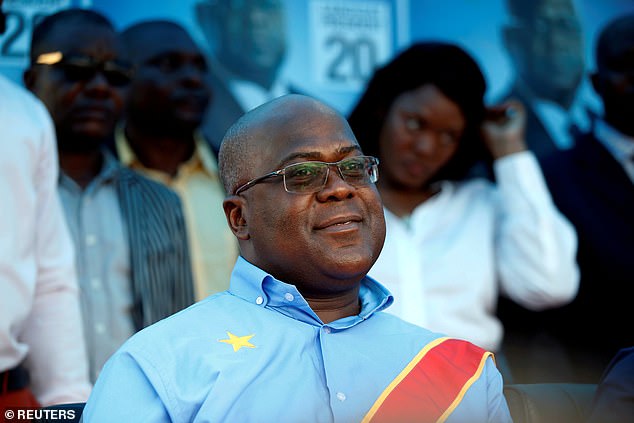 Felix Tshisekedi was declared the winner after the DRC presidential elections on December 30, which has led to more political conflict and public mistrust

Professor Farrar, who recently visited the DRC with a WHO leadership team, said: ‘The worst case scenario is that political instability remains, mistrust grows … and then there’s nothing to stop the epidemic getting embedded into a big urban centre and taking off as it did in West Africa.’

The breakout is the second largest in history after the 2014 West Africa Ebola that lasted for two years, infecting 28,000 and killing more than 11,300.

DOES A QUARANTINED US MEDIC WHO RETURNED FROM THE DRC HAVE EBOLA?

A US medic who was quarantined amid fears he caught Ebola while treating patients in Africa has been released from hospital.

The unnamed physician, 39, did not display any symptoms during his three-week stay in medical isolation at a hospital in Nebraska.

He had been in quarantine since December 29, after returning from the Democratic Republic of Congo, where an Ebola outbreak is ongoing.

The patient came home from a trip to Burundi, in central Africa. The only cases of Ebola reported in Africa this year have been in the DRC.

Reports suggest the medic was given an experimental Ebola vaccine as a post-exposure preventive precaution.

Mr Tshisekedi was surprisingly declared the winner of the election on Thursday, leading to claims of fraud and calls for a recount.

It was supposed to mark the end of a chaotic 18 years of ruling by President Joseph Kabila, and it was believed that Martin Fayulu, Mr Tshisekedi’s rival within the opposition, would win.

The announcement has threatened more volatility in the unstable African state.

Professor Farrar said making sure the public are confident in health authorities is essential when fighting a fast-spreading disease, especially where local services are scant.

An Ebola centre was ransacked in December by protesters who were furious over further voting delays.

Three cities in the DRC, Beni and Butembo in the eastern North Kivu province, and the city of Yumbi in western Bandundu province, were rescheduled by the electoral commission CENI to take place in March this year.

In response, the treatment centre, housing people suspected of having the highly contagious disease, was attacked.

It’s not the first time health workers have been at the forefront of conflict – with medical staff being kidnapped and killed by armed rebels in previous months.

As of 12 January, the total of Ebola cases has risen to 644, including 595 confirmed and 49 probable cases. 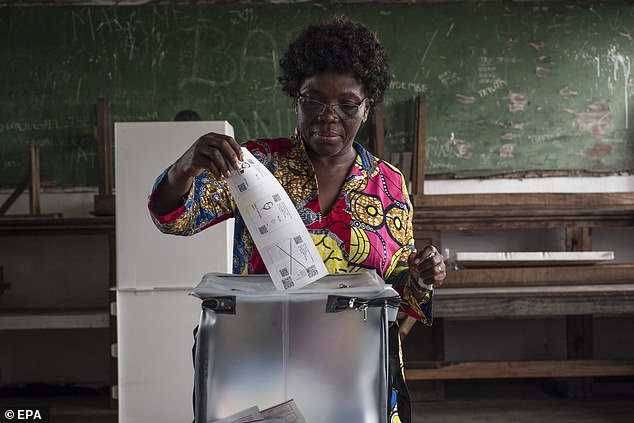 The announcement of the new president, after the election was delayed by two years, has threatened more volatility in Africa’s already most unstable state. Pictured, a woman casts her ballot during the general election in Kinshasa 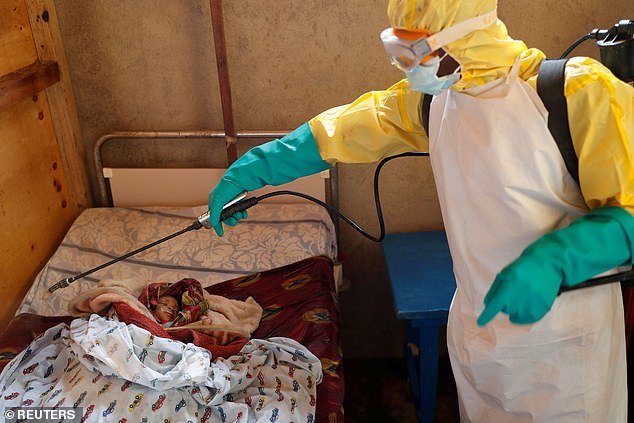 Ebola is still concentrated in North Kivu and Ituri provinces. Pictured, a healthcare worker sprays around a baby suspected of dying of Ebola in Beni, North Kivu

The WHO said the risk of the disease spreading remains ‘very high’ at national and regional levels. Pictured, a health working giving a vaccine to a woman in Mangina

The risk of the disease spreading remains ‘very high’ at national and regional levels, according to the WHO, still concentrated in North Kivu and Ituri provinces.

There are some signs case numbers in the North Kivu city of Beni may be dwindling, but WHO experts are cautious.

They say the apparent lull may be due to people getting ill but failing to seek proper diagnosis and treatment.

Professor Farrar said people are often scared to come forward to government or international health teams who are trying to help.

The outbreak, which has been difficult to control because of armed violence and community protests, is expected to rage on into the middle of this year, experts on the ground have warned.

Neighboring countries Uganda, Rwanda and South Sudan have been on high alert for months, as the WHO works urgently to avoid people becoming infected over borders.

WHAT IS EBOLA AND HOW DEADLY IS IT?

That epidemic was officially declared over back in January 2016, when Liberia was announced to be Ebola-free by the WHO.

The country, rocked by back-to-back civil wars that ended in 2003, was hit the hardest by the fever, with 40 per cent of the deaths having occurred there.

Sierra Leone reported the highest number of Ebola cases, with nearly of all those infected having been residents of the nation.

WHERE DID IT BEGIN?

An analysis, published in the New England Journal of Medicine, found the outbreak began in Guinea – which neighbours Liberia and Sierra Leone.

A team of international researchers were able to trace the epidemic back to a two-year-old boy in Meliandou – about 400 miles (650km) from the capital, Conakry.

Emile Ouamouno, known more commonly as Patient Zero, may have contracted the deadly virus by playing with bats in a hollow tree, a study suggested.

HOW MANY PEOPLE WERE STRUCK DOWN?

Figures show nearly 29,000 people were infected from Ebola – meaning the virus killed around 40 per cent of those it struck.

Cases and deaths were also reported in Nigeria, Mali and the US – but on a much smaller scale, with 15 fatalities between the three nations.

Health officials in Guinea reported a mysterious bug in the south-eastern regions of the country before the WHO confirmed it was Ebola.

Ebola was first identified by scientists in 1976, but the most recent outbreak dwarfed all other ones recorded in history, figures show.

HOW DID HUMANS CONTRACT THE VIRUS?

Scientists believe Ebola is most often passed to humans by fruit bats, but antelope, porcupines, gorillas and chimpanzees could also be to blame.

IS THERE A TREATMENT?

The WHO warns that there is ‘no proven treatment’ for Ebola – but dozens of drugs and jabs are being tested in case of a similarly devastating outbreak.

Hope exists though, after an experimental vaccine, called rVSV-ZEBOV, protected nearly 6,000 people. The results were published in The Lancet journal.