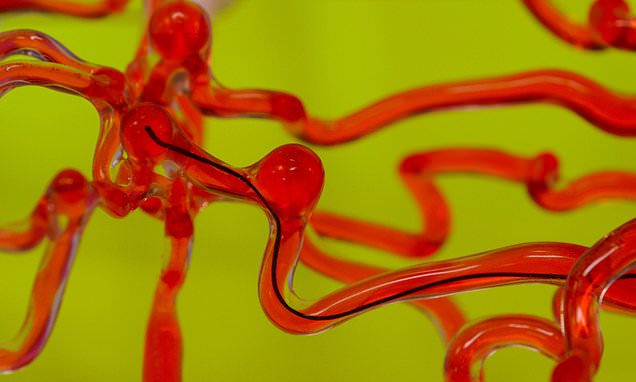 ‘Worm-like’ robot that crawls through the brain could treat stroke patients by clearing potentially fatal blood clots with 0.5mm ‘thread’

A tiny worm-like robot has been developed to treat stroke patients by clearing blood vessel blockages and delivering drugs directly to the brain.

The 0.5mm-wide wire is driven through the body using magnetic fields which can be computer controlled from outside the room.

Although it hasn’t been tested on a human patient, engineers have proved its functions on a miniature obstacle course and in a life-size model of the brain.

They hope it will one day be used to treat people with life-threatening bleeding or blockages in the brain and speed up therapy to save vital moments. 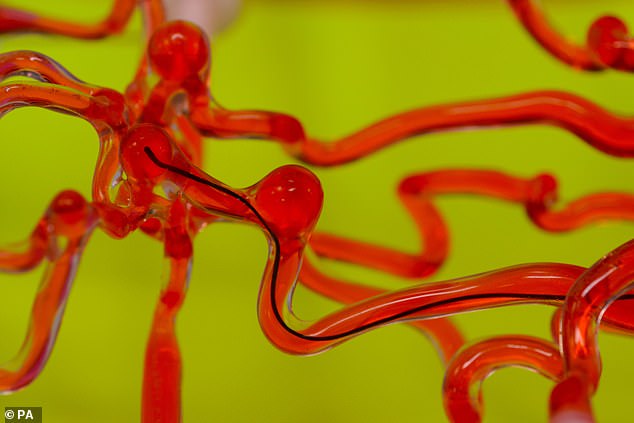 Scientists at the Massachusetts Institute of Technology in Boston have developed the miniscule robot, which is a few centimetres long.

It’s made of a flexible mix of nickel and titanium and coated with a lubricating hydrogel which helps it to slip through tight tubes without damaging tissue.

Developers, including MIT’s Professor Xuanhe Zhao, said the wire could be injected into patients and controlled with magnets or even their own internal motors.

The devices could reduce the time it takes for doctors to clear a blockage in the brain in the event of a stroke – the quicker stroke patients get treatment the better their chances of survival.

Dr Zhao said: ‘If acute stroke can be treated within the first 90 minutes or so, patients’ survival rates could increase significantly.

‘If we could design a device to reverse blood vessel blockage within this “golden hour”, we could potentially avoid permanent brain damage. That’s our hope.’

The team also designed the wire to be able to deliver drugs directly into the brain to help it recover in the moments after a potentially deadly bleed.

Blood clots blocking circulation in the brain cause around 85 per cent of all strokes.

More than 100,000 strokes happen every year in the UK and it’s the fourth biggest cause of death. Around 1.2million Britons alive today have survived a stroke but many are left with disabled.

Blocking the brain’s blood supply starves it of oxygen which can cause parts of the tissue to die and cause nerves to break down, seriously damaging other parts of the body.

The worm-like wire could make it easier for surgeons to clear these damaging blockages and remove the need to use hand-controlled wires in some situations.

In this procedure the wire is usually pushed into the body through a large artery in the lower body and watched using X-ray images from a fluoroscopy as it’s passed throught the body and up into the vein.

Dr Zhao and his colleages said the same fluoroscope imaging could be used to track the remote-controlled wire but it wouldn’t require physical force to push it.

Lead author on the study, PhD student Yoonho Kim, added: ‘Existing platforms could apply magnetic field and do the fluoroscopy procedure at the same time to the patient, and the doctor could be in the other room, or even in a different city, controlling the magnetic field with a joystick.

‘Our hope is to leverage existing technologies to test our robotic thread in [people] in the next step.’

The team’s paper was published in the journal Science Robotics.

HOW CAN YOU PREVENT A STROKE?

The best way to help prevent a stroke is to eat a healthy diet, exercise regularly, and avoid smoking and drinking too much alcohol.

These lifestyle changes can reduce your risk of problems which could trigger a stroke, such as arteries becoming clogged with fatty substances, high blood pressure or high cholesterol.

An unhealthy diet can increase your chances of having a stroke because it may lead to an increase in your blood pressure and cholesterol levels.

A low-fat, high-fibre diet is usually recommended, including plenty of fresh fruit and vegetables (5 A Day) and wholegrains.

You should limit the amount of salt you eat to no more than 6g (0.2oz) a day as too much salt will increase your blood pressure: 6g of salt is about 1 teaspoonful.

Regular exercise can maintain a healthy weight and help lower your cholesterol and keep your blood pressure healthy.

For most people, at least 150 minutes (2 hours and 30 minutes) of moderate-intensity aerobic activity, such as cycling or fast walking, every week is recommended.

Smoking significantly increases your risk of having a stroke. This is because it narrows your arteries and makes your blood more likely to clot.

Cut back on alcohol

Excessive alcohol consumption can lead to high blood pressure and trigger an irregular heartbeat (atrial fibrillation), both of which can increase your risk of having a stroke.

Because alcoholic drinks are high in calories, they also cause weight gain. Heavy drinking multiplies the risk of stroke by more than 3 times