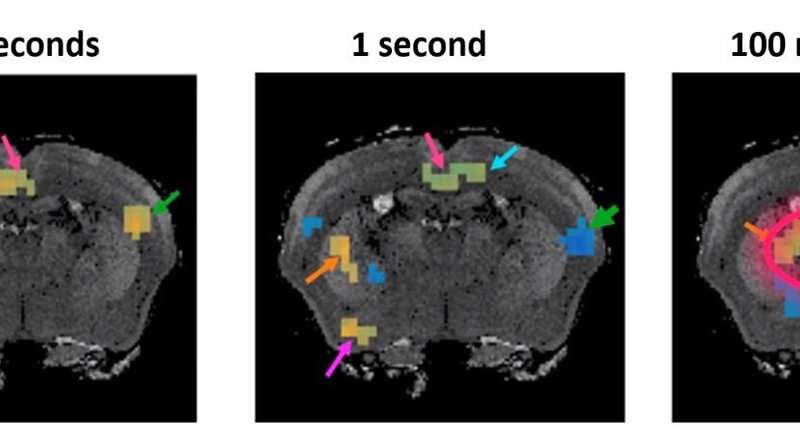 The speed of the human brain is remarkable—in a fraction of a second, neurons are activated, propagating thoughts and reactions to stimuli. But the speed at which we can noninvasively follow brain function using an MRI is not as impressive. Functional MRI (fMRI), which measures changes in blood oxygen levels, has revolutionized the field of neuroscience by revealing functional aspects of the brain. But the changes that fMRI is sensitive to can take up to six seconds in humans—a veritable eon in brain time. Investigators from Brigham and Women’s Hospital, in collaboration with colleagues at King’s College London and INSERM-Paris, have discovered a fundamentally new way to measure brain function using a technology known as magnetic resonance elastography (MRE), an approach that creates maps of tissue stiffness using an MRI scanner. In a paper published in Science Advances, the team presents data from preclinical studies indicating that the technique can track brain function activity on a time scale of 100 milliseconds. Studies of the technique in human participants are now underway.

“What excites me most is that this an entirely new method, and I’ve always been intrigued by new science,” said co-corresponding author Sam Patz, Ph.D., a physicist in the Brigham’s Department of Radiology and professor of Radiology at Harvard Medical School. This work, which started out as a hunch and is now being borne out by rigorous experiments, represents the collaborative work of an international team dedicated to the pursuit of this new way of imaging brain function. “The data we are publishing was obtained in mice, but translation of this technology to humans is straightforward and initial studies are currently underway.”

This work is the culmination of a five-year collaboration between Patz, co-corresponding author Ralph Sinkus Ph.D., and many others. Sinkus, a physicist and professor at King’s College London and INSERM Paris, is a pioneer in the field of MRE and played a key role both in helping get the MRE research program started for preclinical testing in Patz’s Boston-based lab as well as in carrying out the research being reported. Both Patz and Sinkus point to each other as an example of how a true collaborative relationship should function.

Although initially interested in applying MRE to the lungs, the team decided to also run scans of the brain. The results from these scans revealed something surprising: The acoustic cortex was stiffening, for no apparent reason. “These results were so unexpected that we had to pursue them, and this observation is what sparked everything else,” said Sinkus. “It’s a true interest in science that made this happen.”

On a hunch, Patz plugged one of the mouse’s ear canals with a gel. Sure enough, when he took another “elastogram” image of the mouse’s brain, he could see that the auditory cortex on the side of the brain that processed sound from that ear had begun to soften. In repeated preclinical studies, this initial observation has been replicated, showing which regions of the brain stiffen or soften under different types of stimulus timing.

“The intriguing novelty of this approach is that the stiffening/softening of specific brain regions persists even when stimuli as short as 100 milliseconds are presented to the mouse,” said Patz.

Both Sinkus and Patz agreed that the changes in stiffness parallel neuronal activity, allowing one to “see the brain thinking” in almost real-time.

The team is now interested in using MREs to observe neuronal activity in the human brain, which could have implications for diagnosing and understanding neurological pathologies in which neuronal activity may be slowed, disrupted our rerouted—such as Alzheimer’s, dementia, multiple sclerosis, or epilepsy.

The team’s approach leverages novel hardware to induce vibrations in the brain—an essential part to measure brain stiffness via MRI. Patz likens the elastography apparatus to holding an electric toothbrush against one’s head in order to create tiny mechanical waves that travel through the brain. Standard MRE methodology was used to measure the waves as they travel through the brain but a new mathematical approach by the Sinkus group was implemented to create the elastograms from the raw data. The team also used a new MRE protocol to compare the stiffness of the brain in two different functional states that correspond to a stimulus applied or not applied to the hind limb in mice. The researchers present data showing that modulating the stimulus influenced the location, phase and the intensity of the elasticity changes seen in the brain, meaning that they can visualize regional responses in the brain as they unfold at high speed.