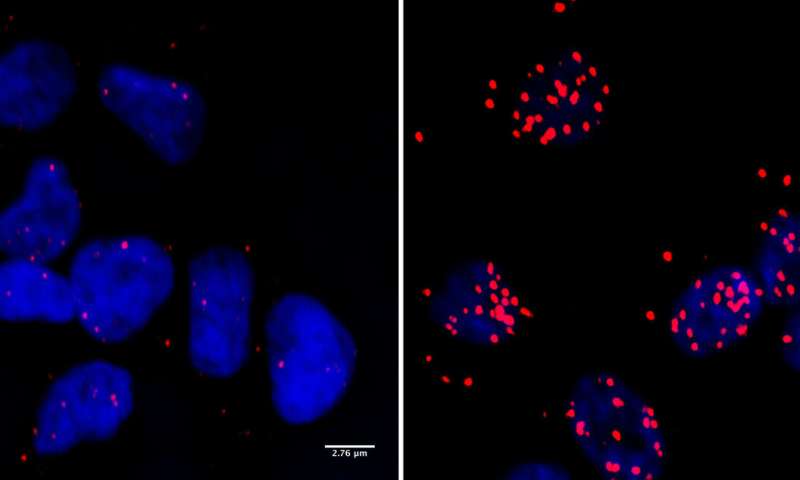 Anyone who has ever studied the molecular basis of breast cancer will probably have heard of BRCA1, a protein that protects the cells of breast tissue against cancer. Surprisingly, this protein can also have the opposite effect: In another type of cancer, neuroblastoma, it helps to keep the tumour stable. Research groups from Würzburg, Göttingen and the Netherlands report their results in Nature.

Neuroblastoma is a cancer that occurs in early childhood. Degenerate cells of the nervous system grow into tumours in the abdominal cavity; the disease can progress very differently. Less aggressive tumours can be treated well or disappear spontaneously. On the other hand, the survival prospects for children whose cancer cells contain the tumour protein MYCN are particularly poor.

Investigations on cell cultures and patients

“In aggressive neuroblastomas, the tumour protein MYCN must interact with BRCA1 in order to keep the tumour alive,” says Dr. Steffi Herold, a researcher in Professor Martin Eilers’ research group at the Biocenter of Julius-Maximilians-Universität Würzburg (JMU) in Bavaria, Germany. The group discovered this in cell culture experiments.

The results were also confirmed in tissue material from patients: Tumours of children containing MYCN always have high concentrations of BRCA1. This was shown by researchers from Amsterdam and Utrecht, who are cooperating with Eilers’ group.

In a publication in Nature, the JMU team describes the mechanism by which the BRCA1 protein keeps neuroblastoma cells alive. Because cancer cells grow far too fast and divide far too often, they have to run their metabolism at very high speed. This means stress for the cells, and this is where BRCA1 comes in: “Put simply, it ensures that the cells are able to cope with this stress,” explains JMU postdoc Dr. Gabriele Büchel.

BRCA1 opens a side track in the event of damage

In the cells of the neuroblastoma, the protein MYCN controls transcription, i.e. the reading of genetic information in the cell nucleus. Professor Eilers compares this process, which is essential for the survival of the cell, with a train running on a track. “If the track is damaged, the train comes to a standstill. The growth of the tumour cell stops, it threatens to die.” In this case, the protein BRCA1 ensures that a switch to a side track is opened. There, the train can wait until the tumour cell has repaired the damage on the main track.

So the proteins MYCN and BRCA1 work hand in hand to ensure that the metabolism of tumour cells can continue to run at full speed. The JMU team became aware of this when they looked for previously unknown targets in neuroblastoma cells that could be used to inhibit tumour growth.

Although patients with neuroblastoma will not benefit immediately from the new findings, the Eilers team will pursue the topic. They expect that the findings will contribute to the development of new therapies for this disease. They also hope to clarify whether MYCN and BRCA1 proteins only work together in neuroblastomas or whether there is a general mechanism that also affects other types of cancer. Dr. Herold will analyse for instance prostate cancer cells because the MYCN protein is also associated with a highly aggressive form of these tumours.