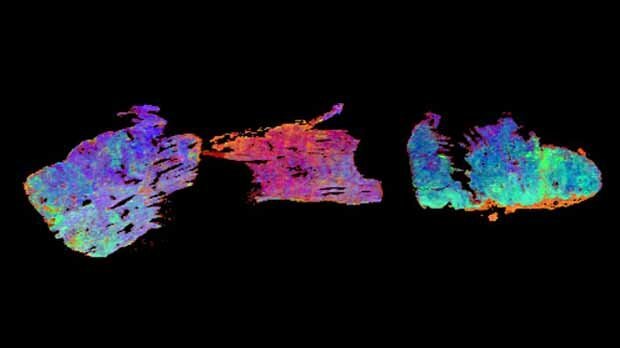 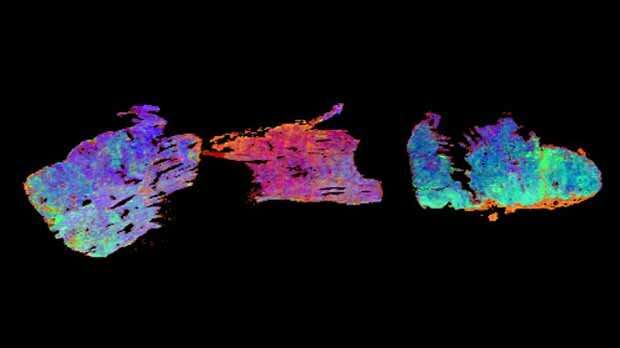 In southwest London, on the edge of Bushy Park, is a building whose occupants are responsible for measurements. Precise measurements, to be precise. The building is the gatekeeper of time, the resting place of the kilogram, and home to the scientists responsible for making sure the National Lottery balls are exactly the same.

This building is the National Physical Laboratory (NPL). It’s the UK’s National Measurement Institute, and for the last 18 months, a team of scientists there have begun turning their precise eyes on cancer.

As part of our Cancer Research UK Grand Challenge programme, we’ve funded scientists from NPL to measure molecules inside tumours. They plan to collect this information together, from thousands of samples, to produce a complete ‘Google Earth’ for cancer.

Professor Josephine Bunch is the faculty director at NPL’s campus in Teddington, where she oversees the monumental task that’s still getting up and running.

“The aim of our project is to examine what’s going on within cells of tumours to understand how we can better treat them,” she says.

And since our last visit to the lab, the team has been busy. They’ve now shared with us an early glimpse of 3 stages of the 3-D chemical map that they’ve started to draw out.

The team plans to produce images of tumours at previously unseen levels of detail. They aim to catalogue the chemicals of thousands of tumours, moving from the surface to deep inside individual cells.

Zooming in to this level, and looking at the chemicals on the inside of single cells, means the common microscope has to make way for some more specialised equipment.

“Microscopes have really helped us understand enormous amounts about cancer and tumours,” says Bunch. “But unlike our instruments, they can’t produce an image in enough detail at such a small scale.”

“The instruments we’ve built let us see all of the molecules inside a single tumour cell at once.”

The instruments Bunch and her team use to image tumours rely on something called a mass spectrometer.

Mass spectrometers are like molecular weighing scales. As most molecules in our body have a specific weight, if we can weigh them, we can identify them.

NPL has a range of mass spectrometers that weigh molecules at different levels of detail, like zooming in on a map.

“We have been operational for about 18 months. We have used this time to optimise how we use these instruments and we have collected a whole range of quite precious samples,” says Bunch.

With the instruments now fully operational, the team can begin taking us from the whole tumour to the inside of a single cell, much like Google Earth can navigate the globe from your phone.

The first images cover a large area of the tumour’s surface in less detail, as if you’re observing a cityscape from high above. This maps out the surface of the tumour sample, giving a good overall first impression of the molecules that are there. 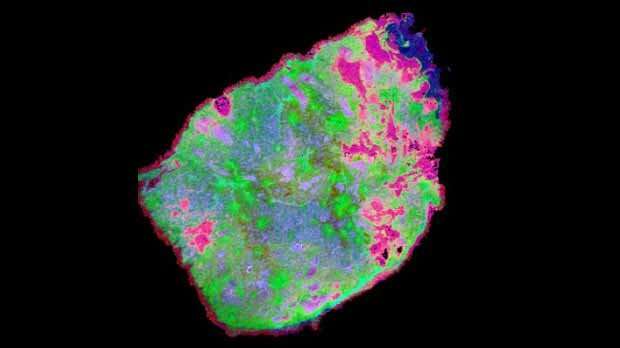 This technique is important because it doesn’t take long to capture an image of one piece of the tumour, called a section. “We can look at lots of sections of a tumour and obtain images in less than an hour,” says Bunch.

The team detects and locates hundreds of chemicals at a time, helping them identify areas of interest. But this machine can’t zoom in further to examine these patches at ‘street view’.

A second machine uses a laser to home in on the areas of interest and identify molecules inside the tumour cells. But with a lot more information to collect, this step takes time.

“For this technique it probably takes several hours to produce a map of one single tumour,” says Bunch, adding that this machine is great for”bridging the gap” between viewing the whole tumour and mapping individual chemicals inside the single cells.

Inside houses or single cells

The final piece of the map comes from a third machine, which detects specific molecules.

“This method is quite different to the others,” says Bunch. “We are not measuring hundreds of thousands of molecules in every location, like before. This time we have chosen what we are looking for using a chemical label.”

Pictures from this instrument give the fine detail. The machine looks at the activity of specific chemicals inside tumour cells by sticking a radioactive flag to them. The radioactive flag doesn’t disturb what’s happening inside the cell, but it does make it traceable by scientists.

Bunch and her team are using this machine to peer inside cancer cells and find out how they work.

“Really,  we want to stop tumours receiving food and being able to use it,” says Bunch. “If we can understand how they use and make energy differently compared to normal cells we can develop drugs that might stop their energy processes happening. Then we will be better at treating cancer.”

Stitching the map together

“We are the only lab in the world that brings all of the different imaging techniques together,” says Bunch.

Now the team intend to repeat these 3 techniques, along with four others, thousands of times, on many different types of cancer.

Molecule by molecule, pixel by pixel, these chemical maps will eventually be stitched together to produce an overall ‘Google Earth’ of the tumour.

Why do we need a map of cancer?

Bunch believes their cancer maps can be used in a variety of ways. “We are already working with people who develop drugs to understand the different regions in tumours and why some drugs get to the location you want them to and others don’t,” she says.

And since the Grand Challenge project began, they’ve started mapping bowel, pancreatic and breast cancers, as well as a kind of brain tumour called glioblastoma.

Bunch and her team say that it’s thanks to patients who’ve donated their tumour tissue after surgery that these maps are starting to take shape.