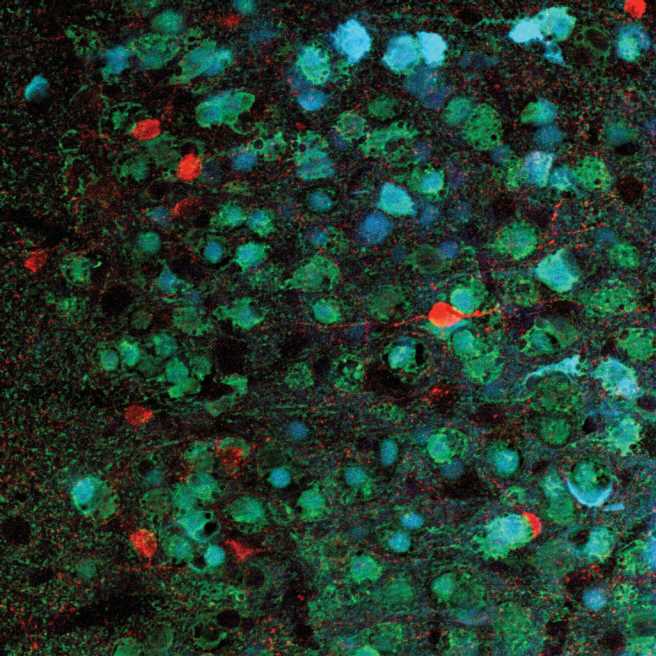 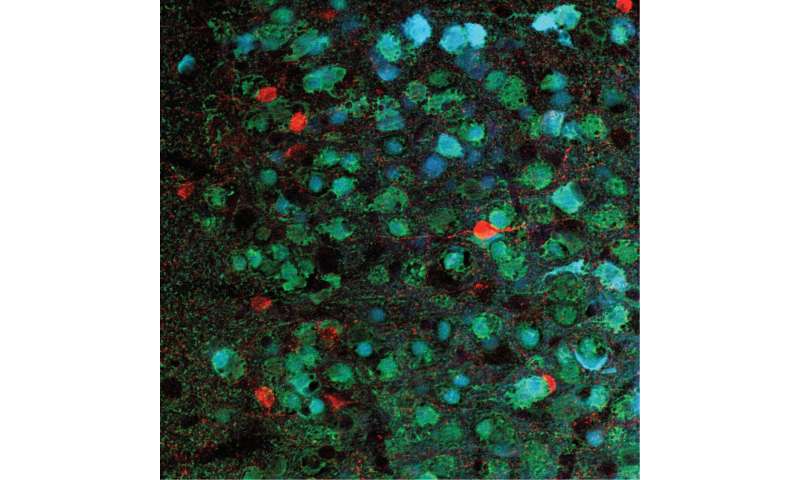 UC San Francisco research has identified a particular group of nerve cells in the brain that play an important role in anxiety’s influence over behavior. The researchers have found that turning off signaling from this small population of neurons in the front of the mouse brain can act as sort of a “chill pill,” reducing the likelihood of anxious behavior driven by signals from another brain region called the hippocampus.

In research published April 30, 2019 in Neuron, scientists led by Vikaas Sohal, MD, Ph.D., an associate professor of psychiatry at UCSF and member of the Weill Institute for Neuroscience, found that mice were less likely to decide to venture into an exposed part of an elevated maze—something mice typically find quite scary—when cells in the prefrontal cortex called “VIP interneurons” were activated.

VIP interneurons—named for their production of a protein called vasoactive intestinal peptide—can shut off signals that normally suppress the activity of other neurons, a brain-circuit double-negative. These cells make up only a few percent of neurons in the brain, Sohal said, but they may play an important role in modifying how signals are transmitted within and between networks of neurons in different brain regions, ultimately leading to changes in behavior.

The prefrontal cortex, a major decision-making structure in the brains of mammals ranging from mice to humans, receives, integrates and processes input from many areas of the brain, and in their new study the researchers found that VIP interneurons within the prefrontal cortex are important for determining when certain signals are used to make decisions.

In the case of anxiety, the brain’s hippocampus—also recognized as a key player in the formation of memories and the generation of emotions—plays a role, and recently scientists including Mazen Kheirbek, Ph.D., an assistant professor of psychiatry at UCSF and member of the UCSF Weill Institute for Neurosciences, have found that reducing activity in a particular region of the hippocampus in mice can reduce anxiety.

“We think VIP interneurons act as the gatekeeper for the hippocampus to transmit emotional information to the prefrontal cortex for use in decision making,” Sohal said.

In the wild, a decision to avoid or explore an open space often affects a mouse’s vulnerability to predators. Anxiety and avoidance might often be a good survival strategy for mice, but in humans chronic anxiety can be a debilitating condition, affecting an estimated seven percent or more of the U.S. population. If not recognized and treated, an anxiety disorder may contribute to broken relationships, stunted careers, alcoholism and other life-diminishing outcomes.

While the new findings do not immediately suggest new treatment strategies, according to Sohal there is good evidence from many studies that avoidance behavior in mice when they are confronted with open space is a good analogy to anxious responses In humans, and that there’s more that can be learned from studying signaling within networks of neurons in mice. Responses to an anxiety-provoking stimulus—rapid heartbeat and hormonal changes, for example—are similar in mice and humans, and drugs used to treat human anxiety can reduce avoidance behavior in mice, Sohal said.

In the new UCSF study, the team of researchers, including Anthony Lee, an MD/Ph.D. student, and Margaret Cunniff, a neurosciences graduate student, used optogenetics, a method in which laser light-activated proteins can activate or suppress the activity of cells. The scientists used this technique to switch off the transmission of electrical signals by VIP interneurons at specific times to see how this affected behavior.

By determining exactly when VIP neurons normally become active and influence behavior, the researchers were able to figure out exactly when to shut off VIP interneurons in order to reduce anxiety-related avoidance behavior. The behavioral response required that the light stimulation turning off the VIP interneurons not be continuous, but rather that it occur at the moment when the mouse was approaching the decision point in the maze—when VIP firing normally occurs and amplifies the avoidance signal from the hippocampus.

“In this study we found out how this particular type of neuron basically regulates how strongly the prefrontal cortex receives the input from the hippocampus,” Sohal said. “Now we want to know how these VIP interneurons might influence communication between other structures within the brain.”