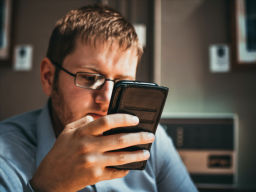 Parents can miss witnessing the birth of their child for all kinds of reasons: Sometimes they’re deployed overseas, sometimes they’re stuck in traffic, and sometimes their babies just can’t wait to arrive and make their grand entrance in a spectacular fashion. However, the reason this Redditor says her husband missed the birth of their daughter was because he never bothered to check his phone — and yet he’s blaming the mom.

Redditor pookiennermal posted her story to the AITA subreddit looking to see if her husband’s frustration with her over missing the birth of their daughter was warranted. OP started her post by offering us a little backstory about how her husband, a very private person, really does love her in order to avoid any confusion over whether he was ignoring her messages instead of just… not checking his phone periodically while his wife was days from labor, we guess?

“I am pregnant and went into labor,” she writes. “It was only a few days before my due date so nothing concerning. I tried to call his work, but his phone went right to voice mail because he was in a meeting.” She then details all of the other ways she tried to reach out to her husband while her cervix was actively dilating, which included sending him a text, calling him back, and leaving messages for him to let him know that the baby was coming.

“My labor was getting further along,” she writes. “So I called a friend to get a ride to the hospital.”

By the time her husband checked his phone at the end of the day, baby pookiennermal had already been born. “My husband is upset with me though. Saying I should have come by his work to tell him it was time,” she writes. “But he has [always] been distant about work. I know what department he works in but not where his office is in the building. It would have been awkward.”

Screw awkward, it would’ve been painful and annoying to waddle through an unfamiliar office searching for a man who could’ve prevented all of this if he’d just periodically checked his phone like a normal person would in the week — actually, months — before his baby was due.

It would appear that almost all of Reddit agreed with us on this one, because the comments were all some variation of “Who doesn’t keep their phone on them when their wife is that close to her due date?” Additionally several users who had given birth in the past shared how they came up with contingency plans in the event they couldn’t reach their partners when they went into labor.

“When I had my daughter, my husband wasn’t allowed to have his phone at work except for the end of the day when they were just waiting for the word that everything was done and they could leave,” wrote user LdyAce. “I had his boss’ phone number taped to the fridge and on a paper in my wallet to call if I went into labor while he was there. His boss was fully aware of it as well. As well as his work friend’s number in case his phone died and his boss couldn’t be reached, and also his best friend’s number in case something happened while they were hanging out.”

Another user wrote about how she and her husband had to come up with a more high-tech plan. “My husband works in a department that can’t have phones for safety reasons. For the last FOUR weeks of both pregnancies, he kept a web messenger up to get updates, made sure someone was by the work phones at all times in case I called, made sure I had his boss’ cell in case he needed to be tracked down,” wrote user MagnoliaProse. “Before he went to work, he checked on me so he had an idea how close things might be.”

Now, we’re not saying there’s something fishy with Mr. Pookiennermal’s story, but user melindseyme said her father worked for a government defense contractor and was easier to reach than this guy. “My mom never called him at work. I knew nothing about his job until after I graduated high school (though not for lack of trying), and it was just his title: Project Manager. I’m still not convinced that was his real title; he may have just been trying to get me off his back. He could totally have been a spy and none of us would have known,” they wrote. “That said, he managed to be there for the birth of every one of his six biological children. I’m waiting for the update where OP’s husband is actually a serial killer somehow.”

The dad can look at these intimate images of childbirth to see what he missed.