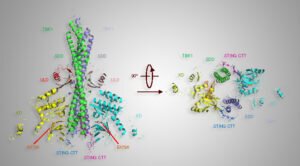 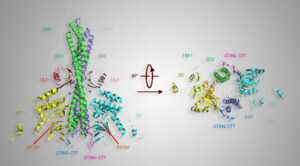 A small segment of a human gene STING, stimulator of interferon genes, could hold the key to treating autoimmune diseases and cancer, according to a study by Texas A&M AgriLife Research scientists.

Their research, “A conserved PLPLRT/SD motif of STING mediates the recruitment and activation of TBK1,” was published in the May 30 issue of the international scientific journal Nature.

STING are proteins that signal immune responses in humans and other animals, Li said. The PLPLRT/SD motif the scientists discovered is a short stretch of amino acids near the end of the STING protein that plays a critical role in turning on the immune system to fight against viral infections.

TBK1 is a protein kinase associated with diseases like frontotemporal dementia, some cancers and autoimmune diseases like Lupus, Li said. The Li lab identified a short sequence in the protein STING that recruits and activates TBK1, thus turning on the immune response.

The scientists found that a conserved PLPLRT/SD motif within the C-terminal tail of STING mediates the binding of TBK1, Li said. This demonstrates the direct binding between STING and TBK1 is essential for STING mediated signaling.

“Our immune system is like an electrical circuit,” he said. “We discovered that this motif of STING is involved in the activation of the TBK1, essentially like a switch that turns the immune system on to produce interferons to fight against viral infections or cancer.”

The team of scientists determined the crystal structure of TBK1 bound to STING reveals the detailed molecular interactions between these two proteins. They used a very powerful X-ray beam produced by the Advanced Light Source at the Lawrence Berkeley National Laboratory of the University of California to collect high-quality diffraction data, Li said.

These findings provide a basis for future scientific inquiry and development of STING binder and blocker drugs in the fight against viral infection, cancer and autoimmune disorder, Li said. It’s a seemingly small discovery in basic research, but one that could have enormous implications regarding the way diseases are treated in the future.